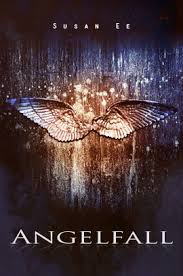 THIS IS NOT A FAIRY TALE!

It’s been six weeks since angels of the apocalypse descended to demolish the modern world. Street gangs rule the day while fear and superstition rule the night. When warriors angels fly away with a helpless little girl, her seventeen-year-old sister, Penryn, will do anything to get her back.

Anything, including making a deal with an enemy angel.

Raffe is a warrior who lies broken and wingless on the street. After eons of fighting his own battles, he finds himself being rescued from a desperate situation by a half-starved teenage girl.

Traveling through a dark and twisted Northern California, they have only each other to rely on for survival. Together, they journey towards the angels’s stronghold in San Francisco where Penryn will risk everything to rescue her sister, and Raffe will put himself at the mercy of his greatest enemies for a chance to be made whole again.

Angelfall is written in first person through protagonist, Penryn Young, who finds herself solely responsible for taking care of her schizophrenic mother and her wheelchair bound seven year old sister Paige. While Penryn tries to relocate her sister and mother to safer grounds, they unintentionally get in the middle of an Angel fight, in which Penryn’s only option is to save the outnumbered Angel (Raffe) but as form of payback for doing this, an Angel who was fighting Raffe abducts Paige. Penryn is determined to get Paige back and since her mother deserted her, the only way to find out where Paige has been taken is to seek help from the bashed and broken Angel -Raffe.  Penryn and Raffe form an unheard of alliance and while it is clear they do not trust each other, they need each other’s help. On their travels they are constantly facing new challengers and enemies they must overcome before they arrive at their final destination where their biggest challenge yet is revealed.  Faced with new unexpected enemies they realize they need each other to survive.

This story is fast paced from beginning to end. It’s extremely well written, being very descriptive and visual – even quite grotesque with the details at times. It portrays a unique take on Angels, which if I am honest, I still don’t know how I feel about since morally I believe Angels are “good” and are there to look after human kind not destroy it.  So it sits a little unsettling for me but I am keeping an open mind for I believe there is a lot more to this story yet to come, especially since the Angels seem to be involved in a civil war? This is yet to be confirmed.

Angelfall leaves you wanting to know more, for a lot of questions are not answered in this book. The biggest and obvious ones being :  Why did the Angels come to earth to demolish the modern world? What did Raffe do to create these enemies? And you will have a lot more outstanding questions if you read the book and normally these outstanding questions frustrate me as the reader but in this book so much was happening you just know Ee is setting you up for a series that will be out of this world!  I felt somewhat satisfied with the information I do know from this book, BUT with the cliffhanger of an ending I am desperate to find out what is going to happen next with all these characters! It is OMG material!!

Penryn’s character is so strong and mature it makes her so likeable and real, you believe everything she is thinking and feeling and her morals and values towards her family are so admirable.  This is my favourite quote of the book and it sums Penryn’s character perfectly, “I knew from the start your loyalty would get you killed. I just never thought it would be your loyalty to me that would do it”.

The relationship between Penryn and Raffe is painful for me to observe for it’s like the forbidden fruit. You can feel the chemistry and the desire – everything you would want in a romantic build up between two characters but with who and what Raffe represents I don’t feel the readers will get a happy ending here, I could be wrong – but I highly doubt it for the repercussions are too great. I feel this is going to be a love from a distance relationship and for me the romantic – this is going to kill me to read…but I am going to do it anyway for I am that much of a sucker!

So now I am onto the sequel, World After  for I am biting my nails desperate for some answers!