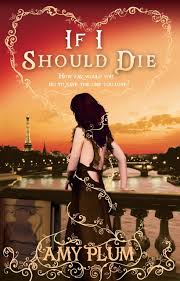 A UNIQUE AND BEAUTIFUL SERIES!

I will not lose another person I love. I will not let history repeat itself.

Vincent waited lifetimes to find me, but in an instant our future has been shattered. He was betrayed by someone we both called a friend and I lost him

It shouldn’t be possible, none of it should be, but this is my reality. I know Vincent is somewhere out there, I know he’s not completely gone, and I will do anything to save him.

After what we’ve already fought to achieve, a life without Vincent is unimaginable. He once swore to avoid dying – to go against his nature and forsake sacrificing himself for others – so that we could be together. How can I not risk everything to bring my love back to me?

Praise to Amy Plum for writing this unique series, with such a romantic story and setting, with beautiful characters that captured my heart. Thank you!

What captured my heart about this series was its unique plot and paranormal element.  It’s not another overdone vampire, werewolves or witch series. This series is about Revenants, which is a euphemism for Zombies – I know what you’re probably thinking and picturing but it’s nothing like the zombies in The Walking Dead series! You have the good Revenants (Undead Angels) called the Bardia, who spend their existence sacrificing  themselves to save humans and fight against the evil Revenants (Undead demons) called Numa, who spend their existence manipulating and influencing humans to commit evil acts or self sacrifice.

Then you have the fact that this series is set in Paris, which is, in my opinion, the most magical, romantic, historical and artistic place on earth.  Paris provides the perfect setting for the series overall plot and the beautiful love story between Kate and Vincent.  The chemistry between these two characters was so magical and magnetic.

The first book of this series, Die for Me, captured my attention by its beautiful cover and I loved this book so much I read it in a day – I simply couldn’t put it down. Then I was left waiting for the next installment, Until I Die, to be released and after the long wait I felt slightly deflated due to the book’s slower pace and the fact that Kate and Vincent spent a lot of their time apart causing me to miss the magnetism of their relationship.  I am glad to say this installment, If I Should Die, brought the series back with a vengeance.  It has a great pace, great plot, intriguing character twist and turns and more romance with Kate and Vincent working together throughout this installment.

If I Should Die, picks up the story right where it left off in, Until I Die. Vincent has been captured and murdered by the new Numa Leader in an attempt to steal his powers under the assumption he is the Champion, but there is a flaw in the Numa Leader’s plan. Kate, Jules, Vincent and the Bardia, are racing against the clock not only to save Vincent’s spirit and resurrect him back to his body, but to stop and defeat this new Numa Leader and their Numa army before they destroy the city.

All characters in this installment were amazing, especially the characters at La Maison, with a few unexpected and sad surprises. Kate’s character experiences so much growth in this installment, showing so much strength and maturity. Then there is Vincent’s character, which is perfect! He is tall, dark, handsome, romantic and French – what’s not to love? The way I hear him speak to Kate and call her “Mon Ange” (my angel) in my mind in his French accent has me swooning!! Overall, it was Jules’s character that made the biggest impact on me in this installment.  I really felt for him and the feelings he had for Kate which she could never reciprocate.  The romance was always a Kate and Vincent story with Jules falling in love on the side. Amy Plum detailed the exact scene for the reader to witness the exact moment Jules realizes his feelings for Kate in the first book, Die For Me. I truly hope Jules’ story is not over, because it would seem that Plum has set up a perfect spin-off series based around his character and the Revenants in New York City, in which he may have a chance at the happy ending that his character deserves – fingers crossed!

So this is goodbye to a beautiful series. Kate, Vincent and all the characters at La Maison will be sadly missed!