When Hanna Bergstrom receives a lecture from her overprotective brother about neglecting her social life and burying herself in grad school, she’s determined to tackle his implied assignment: get out, make friends, start dating!
And who better to turn her into this sultry siren every man wants than her brothers gorgeous best friend, Will Sumner, venture capitalist and unapologetic player?

Will takes risks for a living, but he’s skeptical about this challenge of Hanna’s…until the wild night his innocently seductive pupil tempts him into bed – and teaches him a thing or two about being with a women he cant forget. now that Hanna discovered the power of her own sex appeal, its up to Will to prove he’s the only man she’ll ever need…

I have mixed feeling about this book. I have read the first two installments of this series, Beautiful Bastard and Beautiful Stranger, and fell in love with both of them! So, in comparison, this book was a little disappointing.

Whilst the chemistry between Hanna and Will was obvious from the start, I unfortunately didn’t find their story as enjoyable to read as I did with Bennett and Chloe from Beautiful Bastard or Max and Sara from Beautiful Stranger.

The first issue I had with the book was the fact that it took FOREVER for the two main characters to get together and hook up in the first place…like at least 7 chapters! And I just really felt that excess suspense was extremely boring to read.  The additional issue with all that suspense was their connection finally did happen, I found I wasn’t really that satisfied.

Like the previous books, Beautiful Player was written in Will and Hanna’s point of view in alternating chapters. This is one thing that I really love about the books as you get a better perspective of what both characters are thinking and feeling in each situation.

I don’t think that Hanna’s character was a very strong one, nor did I like her all that much, she seemed a little childish and annoying to me, and I found myself feeling awkward every time I was reading her chapters. She starts off as this shy, workaholic, with no friends at all, and then all of a sudden she becomes this outspoken girl who is obsessed with sex, which just seemed a little strange to me.  This sudden change of character with no explanation really upset the flow of the plot.

On the bright side, I really like Will’s character and found his chapters somewhat more enjoyable to read! Will was sexy, fit and obviously a well-known player, but he was also so sweet and caring that he came across as pretty much irresistible to me.  It is safe to say I’m pretty sure he is the main reason I even finished the book.

All in all whilst I didn’t enjoy it as much as the preceding installments, it did deliver a fairly good dose of sexual activity, and was quite easy to read, even though I didn’t love one of the main characters!

Anyone who has kept on top of the series like me will find it difficult to resist the temptation of more of the heat and passion delivered in the first two books.  It is unfortunate that this installment left me feeling so cold. 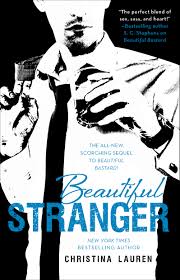 ROLE REVERSAL AT ITS FINEST!

A girl determined to finally live.

And a secrete liaison revealed in all too vivid color.

Escaping a cheating ex, finance whiz Sara Dillon’s moved to New York City and is looking for excitement and passion without a lot of strings attached. So meeting the irresistible, sexy Brit at a dance club should have meant nothing more than a night’s fun. But the manner – and speed – with which he melts her inhibitions turns him from a one-time hookup and into her Beautiful Stranger.

The whole city knows that Max Stella loves women, not that he’s ever found one he particularly wants to keep around. Despite pulling in plenty with his Wall Street bad boy charm, it’s not until Sara – and the wild photo’s she lets him take of her – that he starts wondering if there’s someone for him outside of the bedroom.

Hooking up in places where anybody could catch them, the only thing scarier for Sara than getting caught in public is having Max get too close in private.

I loved this book! Beautiful Stranger, sequel to Beautiful Bastard, had me captured from beginning to end!

What captured me about Beautiful Stranger, was how the female character, Sara, held all the power in the relationship (or agreement) for a change, it was an complete role reversal from – let’s face it – reality! Sara set the rules, the boundaries and the pace of the agreement and managed to keep herself distant and mysterious! It was our beautiful stranger Max, who was out of his element and in complete battle with himself and the situation wanting and needing more from the agreement and Sara.

Beautiful Stranger is focused around Sara Dillon (Chloe’s best friend from Beautiful Bastard), who left her cheating fiancée and Chicago behind to join Chloe and Bennett as head of the finance department at the new branch of Ryan Media in New York City. Sara decided to take this opportunity to start over and explore all “her” wants, needs, desires and fantasies for a change. So when Sara meets her beautiful stranger Max in a dance club, their attraction and chemistry is instant and consuming allowing Sara to take her personal desires and fantasies to a whole new level. That one evening changed everything for Sara and Max; they both felt things they have never felt or experienced before, which left them wanting and craving more! After finding out more about each other, Sara puts forward a sex with no strings attached arrangement opportunity to Max, which he, of course, agrees to, finding Sara the most curious girl he has ever met. After a while the rules of the agreement start to get blurry and they fall in love…but old ways die hard and trusting someone with your heart after being burnt is even harder!

What I loved most about this book, was the two main characters and really seeing their different personalities through their alternating point of view chapters. I loved how Sara’s character had a real cloak and dagger personality going on with her internal struggle to balance the person she is and perceived to be with the person who she wants to be in her fantasies and desires. But I have to say it was Max’s character that had me swooning in this book – I really did fall in love with him, British accent and all! As the reader, he had me laughing, he had me blushing, he made my heart pump and he almost had me tears when he was heartbroken. Witnessing his character filled with confusion and being in unchartered territory while falling in love with Sara was beautiful!

Christina and Lauren delivered on a fantastic sequel to this series; I cannot wait to read where this series takes me next!