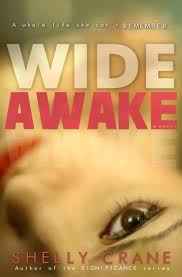 When Emma wakes up in the hospital with no knowledge of how she got there, she learns that she’s been in a coma for six months. Strangers show up and claim to be her parents, but she can’t remember them. She can’t remember anyone. Not her friends, not even her boyfriend. Even though she can’t remember, everyone wants her to just pick up where she left off, but what she learns about the ‘old her’ makes her start to wish she’d never woken up. Her boyfriend breaks up with the new girl he’s dating to be with her, her parents want her to start planning college, her friends want their leader back, and her physical therapist with the hazel eyes keeps his distance to save his position at the hospital.

The first thing that comes to my mind about Wide Awake by Shelly Crane, is that it’s a “Filler Book”, it’s a short quick book to read to waste some time if your waiting for something better to come along! The story was so predictable and so cliché with a plot that has been done many times over – but has been done a lot better!

The overall plot really dragged out, I kept saying in my mind…let’s get to it! This story was so basic and predictable; it needed more depth, emotion, chemistry and development. This is the story in a nutshell – rich, mean, popular girl ends up in a coma and wakes up not remember anything and is the complete opposite, nice, good, down to earth girl and falls for the poor, nice, struggling, down to earth, gorgeous Physical Therapist!

I felt no emotional connection to the plot or, more importantly to me, the characters. The main characters Emma and Mason were just OK – readable but I would have liked to see them developed into more than what they became and concluded.  The biggest disappointment was that there were a number of meaningless characters introduced that were pointless…I thought they had purpose but there was none? For example, Emma’s mental therapist showed all these signs of her hiding something or trying to push Emma on a certain path, thinking she had a past or a connection with Mason…but there was no purpose at all for her actions and her character fizzled out with no resolution. I felt the same with Andy’s Ex-girlfriend and the picked on girl with the red foils at school…all these characters had real presence but no real meaning, purpose or resolution and they just fizzled out!

So I am not going to waste anymore time on this review… I think what I have already said is enough!